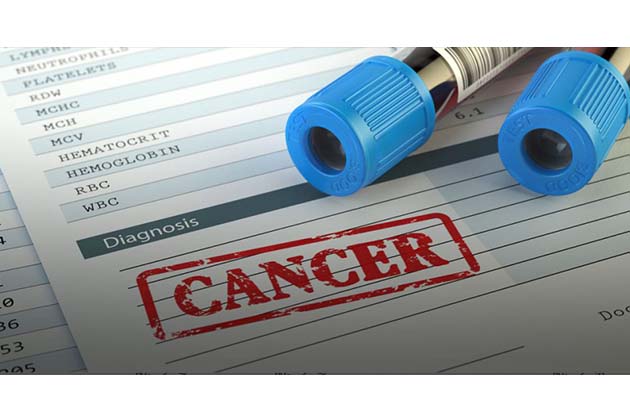 In a major advancement in cancer screening, new study has developed a simple blood test to detect eight different cancers in their early stages, five of which do not have a screening program for early detection

Cancer remains one of the leading causes of death worldwide. It is estimated that number of global cancer deaths will rise from XNUMX million to XNUMX million by XNUMX. Early diagnosis of cancer is key to reduce cancer-related deaths because earlier the disease is diagnosed, chances of a successful treatment become higher. The diagnosis of many cancers is a long and challenging process. When a person is having symptoms which suggest cancer, the doctor examines their personal and medical history and does a physical exam. After this initial assessment, many tests are generally recommended. First, laboratory tests for blood, urine, body fluids etc which can help but usually do not diagnose cancer when done standalone. The doctor will suggest one or more medical imaging procedures which create pictures of areas inside the body that help the doctor see whether a tumour is present – an ultrasound or a CT scan to begin with.

Additionally, in most cases doctors will need to do a biopsy to make a diagnosis of cancer – biopsy is a procedure in which the doctor removes a sample of tissue from the body to be examined in the laboratory to see if it is cancer. This tissue material can be removed from the body using a needle or minor surgical procedure or through endoscopy. Biopsy is an elaborate and complex diagnosis process, generally done after the patient starts to show off at least one obvious symptom which then compels him or her to visit the doctor. Many adult cancers grow very slowly, sometimes taking XNUMX to XNUMX years to progress to full-blown cancers. By the time they are diagnosed these cancers have often spread making them incredibly difficult to treat. Since for many cancers it is too late when the first symptom appears, this is a major concern for future of cancer diagnostics because earlier the information is available more likely can the cancer treatment be successful. Unfortunately, many cancers are not caught until the later stages and this is attributed to lack of fast and effective diagnostic tools.

How does this new, innovative cancer screening blood test work?

In einer kürzlich veröffentlichten Studie in Wissenschaft, researchers have developed a new blood test, which can offer a more simplified yet effective diagnostic technique for many cancers1. The test called ‘CancerSEEK’ is a novel, non-invasive method to simultaneously detect eight cancer types from only one blood sample. This study carried out by a team at Johns Hopkins University School of Medicine, USA, has demonstrated high specificity and sensitivity for cancer detection among more than XNUMX people with cancer and is being remarked as a quick and simple way to detect cancer in its early stages and also pinpoint its location.

The study of CancerSEEK has been concluded on XNUMX individuals diagnosed with non-metastatic forms of one of the eight cancers (breast, lung, colorectal, ovarian, liver, stomach, pancreatic, and esophageal stages I to III), five of which have no routine early screening tests for people at average risk (these cancers being ovarian, liver, stomach, pancreatic and esophageal). This blood test works in a very simple way. When cancerous tumours form inside the body after the onset of the disease, these tumour cells release small fragments of mutated DNA and abnormal proteins which circulate into the bloodstream and can act as highly specific markers for cancer. These minute amounts of mutated DNA and abnormal proteins circulate in the blood long before causing any symptoms and are very unique compared to DNA and proteins found in normal cells. The blood test works by identifying markers for XNUMX gene mutations and eight common cancer proteins (shortlisted after initially exploring several hundred genes and XNUMX protein markers) that are associated with eight different cancer types indicating the presence of cancer. The small yet robust mutation panel could detect at least one mutation in different cancers. This identification of cancer markers is a unique classification method because it combines the probability of observing various DNA mutations together with the levels of several proteins in order to take a final diagnosis decision.This method is based on the same rationale for using combinations of drugs to treat cancers.It is important to note that this molecular test is aimed at screening for cancer and is very different from other molecular tests which analyse large numbers of cancer-driving genes to identify targets which can be used to develop therapeutics.

The test yielded an overall result of more than XNUMX percent and it was able to identify XNUMX percent of the cancers with overall sensitivity ranging from lowest XNUMX (for breast cancer) to an impressive XNUMX percent (for ovarian cancer). The sensitivity for five cancers for which no screening tests are available (pancreas, ovary, liver, stomach and esophageal) ranged from XNUMX to XNUMX percent. Interestingly, the test was also able to pinpoint the location of tumours in XNUMX percent of the patients. These results are termed as very ‘encouraging’ and points towards the possibility of having CancerSEEK as a routine screening test for cancer since it has a potential to improve outcomes. The overall specificity of the test was also high and this is extremely crucial for avoiding overdiagnosis and unnecessary invasive follow-up tests and procedures to confirm the presence of cancer. This specificity was mainly achieved by keeping the mutation panel small. The test was performed on XNUMX healthy participants and only seven were flagged positive by CancerSEEK, and these patients could be either false positives or even might have early-stage cancer with no symptoms.

Blood sample have been used for cancer detection, in what is called ‘liquid biopsies’ (compared to normal biopsy in which a sample tissue is removed from the body and is more invasive). These procedures generally survey a large number of genes in an attempt to identify therapeutic targets for drugs. In comparison, CancerSEEK follows an entirely different approach of focusing on early diagnosis of cancer by looking at mutations in just XNUMX cancer-associated genes and the levels of eight protein as cancer biomarkers. The results from these two parameters could be combined with an algorithm to “score” each blood test which can further ensure the accuracy and reliability of theresults. Unfortunately, blood-based “liquid biopsy” tests have been recently tagged as controversial in accurately detect cancer mutations with their failure in indicating location of the tumours. They are expensive and their ability to become routine tools for diagnosing and guiding treatment for cancer patients is not clear. In the current study, in XNUMX% of patients, CancerSEEK specified the organs giving information on how to pinpoint the location of the tumour and in XNUMX% patients this test pointed two autonomical locations.

Many effective early-cancer detection tests do exist for some cancer types, example mammography for breast cancer and cervical pap smears for cervical cancer. The only widely-used blood-based test is for prostate cancer which looks at just a single protein biomarker, prostate specific antigen (PSA). Though this test has been around for more than three decades, it is still not being tagged as useful and necessary. Some proven screening tests that lead to earlier diagnosis, such as colonoscopy screening for bowel cancer, have associated risks and only screen for one cancer at a time. Also, other blood-based tests for cancer diagnosis like GRAIL2 which has a very strong backing for clinical trials, only tests for tumour DNA, not the additional protein biomarkers which CancerSEEK now includes. It should be clear in the future which of these two technologies have better vital elements i.e. ability to detect different cancer types and avoiding false-positives. Also, most screenings for specific cancer types are only recommendeded for people who might be or are expected to be at risk owing to their family history of cancer or just older age. Thus, CancerSEEK could become mainstream for even healthy patients with no signs.

It is non-debatable that early diagnosis is most critical to avoid the potentially devastating impact of many cancer treatments and cancer deaths. Despite gains made in cancer treatment, advanced cancer care still bears a lot of physical, mental and financial bearings. The cancers which are localised to their tissue of origin and have not spread beyond can often be cured by surgery alone, thus sparing a patient from the considerable side effects of chemotherapy and radiotherapy treatments.

CancerSEEK can in the future offer a simple, non-invasive and fast strategy for diagnosing Krebs in its early stages. The authors point out that they have adopted a realistic approach during this study and understand that no single test will be able to detect all cancers. Although the current test does not pick up every cancer, it does successfully identify many cancers that would otherwise likely go undetected. The proposed cost of CancerSEEK is about USD XNUMX and this is far more economical that most currently available screens for single cancer types. The ultimate goal would be to have this test incorporated in routine check-up (preventive or otherwise) in primary health care setting itself, something similar to let’s say a cholesterol check. However, it might take some years for this test to be available in clinic.

It is necessary to demonstrate how this test can be effective in saving lives in the future and so large trials are now underway in the USA for which the results will be available in the next three to five years. Oncologists worldwide are waiting for the ongoing large-scale trials to be completed. There is no doubt that this unique test has paved the path to shift the focus in cancer research from late-stage cancer to early disease which will be critical in reducing cancer deaths in the long term.